Bowling is one of America’s most beloved pastimes and also one of its most competitive sports.

While it is uncertain who invented the sport of bowling, traces of this game have been dated back to Egypt in 3200 BC, showing that bowling has been the chosen sport through many walks of life.

While the sport of bowling has been modernized throughout the years and many bowling alleys have switched over to electric scorekeeping, it’s good to know how is bowling scored in a manual calculation.

This article will walk you through how bowling is scored. So, you’ll know once your pins go flying, you have bragging rights that are accurate.

How Is Bowling Scored in Bowling

The game of bowling is centered around ten pins set up in a pyramid formation at the end of a sixty-foot lane, with your goal being to knock down as many of these pins as you can in two throws.

A throw is not literally a throw.

Rather it is releasing the bowling ball before the foul line to send it rolling down the lane where it will hopefully get pins knocked down at the end of the lane.

Each set of two throws is called a ‘frame’. In the first nine frames, there are two rolls. In the last, or tenth frame, you get three throws.

On the bowling score sheet, the frames are shaped like a square and are set up to show your points for the first and second roll, in two small boxes in the upper right corner of each frame as well as your total points for the game are below the boxes.

Example of a Frame:

There are also two kinds of frames in the game, an open or a closed frame.

An open frame is where you have thrown your two balls but you did not knock down all ten pins, this is the easiest type of frame to score.

A closed frame, however, is a little bit more difficult.

A closed frame can only be achieved through a ‘strike’, which happens when a bowler knocks down all ten pins on their first row. And a ‘spare’ (which will be talked about later in this article) occurs when you have knocked down all ten pins during your two throws.

Before you start bowling you first need to know the symbols and terms used in the game, what they mean, and how to correctly score them.

While the rules behind each symbol may be confusing at first, with practice you will be able to easily and quickly keep track of your score and confidently tally your points.

The running total is simply adding the current frame bowled to the previous frame’s total.

In ten pin bowling, each of the pins is worth one point, therefore if you knock down eight pins you get eight points for that throw. Good ole reliable numbers are used to keep track of your points.

The ultimate goal of each frame is to get a strike. A strike happens when you knock down all ten pins with your first roll.

What are the scoring rules for a strike? The strike is notoriously tricky to get and can be even harder to score. Shown as an ‘X’ symbol, to score a strike means you get ten points plus the points from the next two throws added into the frame you got the strike in.

Example: How to Score a Strike 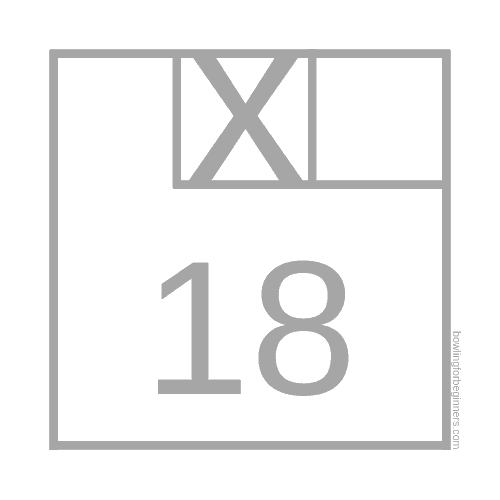 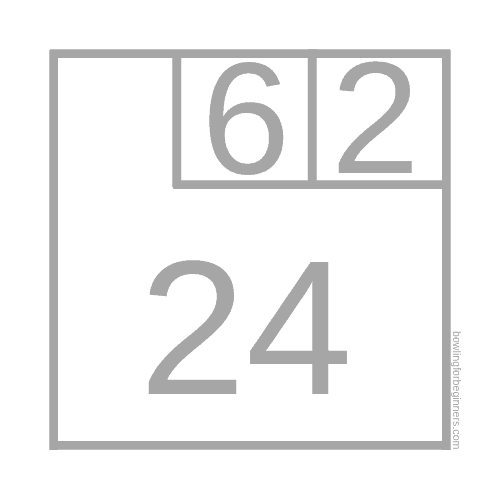 Now, say you roll a strike (your initial strike) and then roll another strike, congratulations, you got a Double!

But this is where the point system gets a little complicated. As mentioned above, a strike is ten points plus the next two throws.

So if you get two strikes in a row but only knock down a few pins on the third shot, the second strike plus the pins from the first non-strike throw are added to the first strike’s frame.

After that, the two non-strike throws are added to the second strike’s frame plus the customary ten points for getting a strike.

Example: How to Score a Double 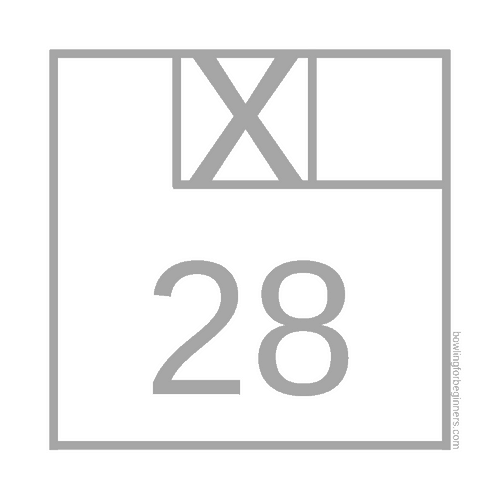 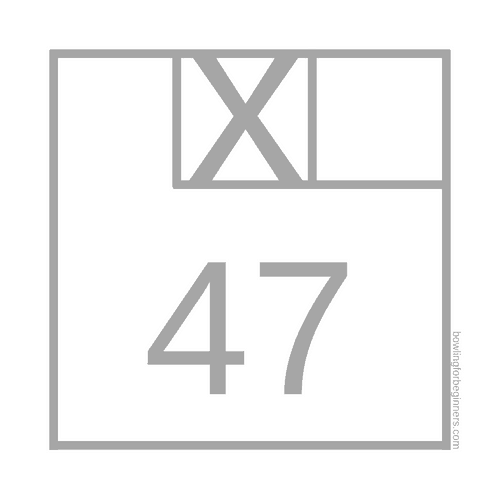 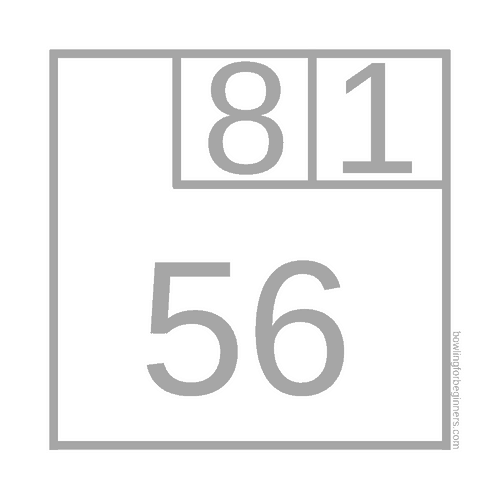 While the name might sound a bit odd, don’t let it put you off, you definitely want a Turkey!

If you have the luck or skill to get a Turkey or three strikes in a row, you automatically get some pretty good bowling bragging rights!

Scoring a Turkey can be a bit more difficult than a double due to the fact that you have another ten points to add to your first and second frame.

The same rules of the strike apply though, you only get ten points plus the next two throws, so if you get a Turkey you automatically get 30 points in the first strike’s frame.

It should also be pointed out that 30 is the highest score possible for one frame, even you if you continue to get strikes after your turkey they do not count towards the first frame’s score.

Example: How to score a Turkey in bowling

(We are going to use the ending bowling score of 56 from the Double example as our starting point.) 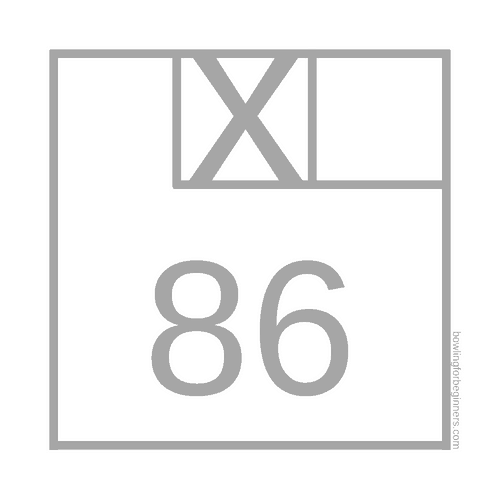 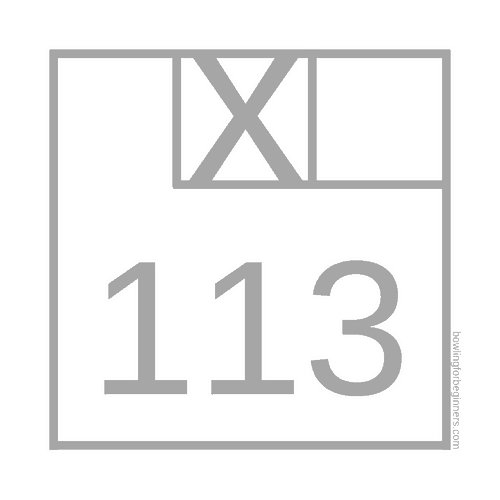 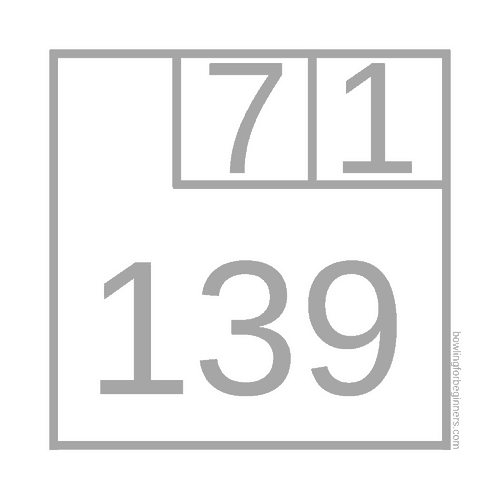 The next frame would be the fifth frame and the last frame, the tenth frame consists of three turns to bowl.

While officially there is no name for a series of consecutive strikes over three, informally, bowlers call a strike streak above three a ‘bagger’.

What do you call a twelve-bagger, twelve strikes, you ask? That is a rare feat called a perfect game with a perfect score (maximum score) of 300!

The biggest thing to keep in mind when scoring strikes is you add 10 plus the next two throws for each strike.

So you didn’t get all the pins down with your first throw, don’t despair. If you knock down the remaining pins with your second throw, you got a spare.

Example: How to Score a Spare

(For your first throw you scored a 5. In your second throw you knocked down the remaining pins.) 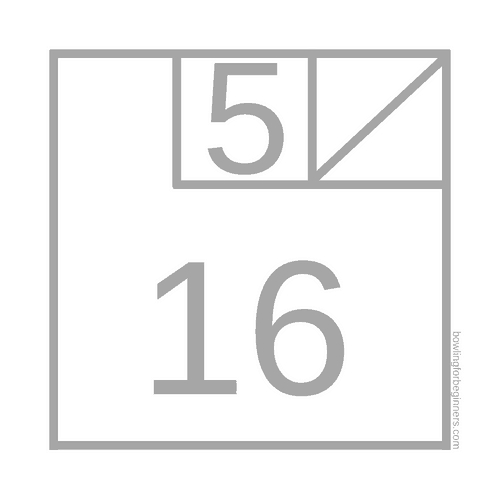 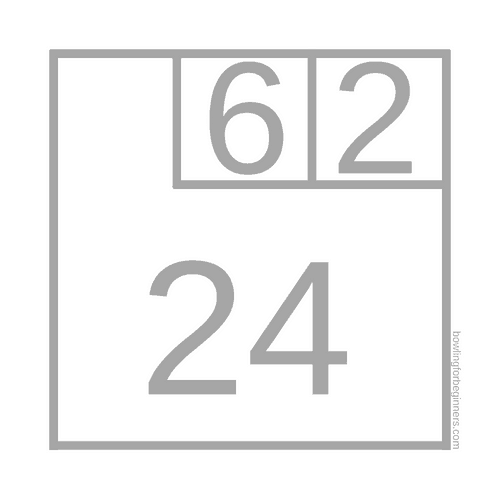 Gutter Balls/Misses: Shown as a ‘-‘

Even the best bowlers sometimes miss those pesky pins or fall prey to the notorious ‘Gutter Ball’.

A gutter ball is what happens when your ball falls off the lane into one of the two gutters on each side of the alley and sadly, they aren’t worth any points.

Sometimes even if you roll straight and true you still miss that last pin, and with no points gained during your throw, you soon see a ‘-‘ mark on your scorecard.

This means you scored no new points for that throw and therefore nothing is added to your new total for that throw. If you’re interested in learning more about the layout of the lanes, read our article about bowling lane dimensions.

Now, what would a competitive sport be without a foul?

In bowling, you foul by having any body part physically touch the floor on the lane side of the foul line.

This usually happens when a foot crosses over the line during a throw but graceful bowlers have lost their balance and fallen to the ground completely before as well.

Due to oil being present on bowling lanes, crossing the foul lane can be very dangerous.

Now say your hand or arms crosses over while you are throwing your ball, that is fine.

But if you cross that line an annoying buzzer or light will signal your shame to all and you get to write ‘F’ on your scorecard. You get no points, but thankfully you get no points taken away as well.

Splits: Shown as a circle around the first number of the frame.

While splits do not increase or decrease points, it is still good to know how they work and how they are written into your scorecard.

A split is where the remaining pins are left in a formation that makes it hard to knock down the rest of the pins in one throw.

The most well-known split is generally called the ‘goal post’ in which the two outer pins remain and you have to hit one just right in order to send it flying across the lane to knock its counterpart down.

Getting one of these splits can almost feel as good as getting the elusive Perfect Game, almost.

As you near the end of your bowling game you come to the tenth frame and final frame, you can’t help but notice that there is an extra box in this frame.

The box is there in case you are lucky enough to bowl a strike or spare in your tenth frame; you get a third roll.

As a bowler there is one question that you will almost always receive when people find out about your chosen sport; “What’s your average?”

Now while you may be tempted to follow the fisherman’s example and say something crazy like 279 be careful, pro bowlers work years to obtain that kind of skill and your listening audience may insist upon watching you play a game to see how you managed to obtain such an amazing average.

Before you go about spouting numbers, it’s a good idea to first know how to find your bowling average.

This is usually done by playing three bowling games in a row and adding all the totals together before dividing the final total by three. Bowlers in leagues work tirelessly to improve their average through weekly practice, almost always playing three games in one night to see how they are improving.

While many wonder what a good average in bowling is, factors such as experience level and practice play a huge part in judging averages.

If you are just starting out in bowling an average around 90 points would be acceptable while pros usually have averages in the 200’s.

As stated before though, averages are more about personal improvement, setting your own goals and seeing how much you can increase your own average.

Almost all professional and competitive bowlers share one common goal that they hope to achieve at least once in their bowling careers, The Perfect Game.

As stated before The Perfect Game is achieved by rolling strikes all throughout your ten frames, adding to a total of 300. The group with the higher team score wins!

Now while some people get confused as to why the score is 300 and not 320 due to the extra strikes in the tenth frame remember, the highest score possible in one frame is 30 points due to a strike counting the next two throws only.

While the scoring of bowling can be confusing and complex at times, by practicing scorekeeping using these basic directions we hope that you have gained a better understanding of how to keep track of your points.

Hopefully, the knowledge, rules, and tips found in this article have also helped you gain a more confident attitude towards the rules of bowling and its scoring.

So the next time you visit your local bowling center or that pesky computer glitches once more, use these opportunities to practice your newfound knowledge and impress your peers with your score-keeping skills.